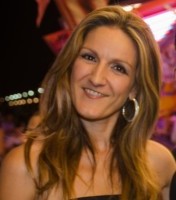 Flo started her artistic life with ballet in Paris, before joining a musical theater troupe (dance, singing and comedy) when she turned 18 in Denver, Colorado, USA.

At the age of 20, she gets professional thanks to a 2 year training at École Supérieure du Spectacle de Paris (Forum Du Mouvement).

Then she starts performing in orchestras as a singer and guitarist. She forms Top40 Bands, as well as  blues and pop-music groups, and starts performing on various stages in Paris, such as le Slow Club, le Sentier des Halles, le Gibus, le Réservoir…

In 2008 she toured in Morocco and started artistic collaborations with various musicians and event agencies. In the following 5 years, she performs in Agadir, Marrakech and Casablanca.

She expands her repertoire, focusing more specifically on Celine Dion’s, until she becomes her impersonator, performing a show that includes the best songs of the star’s career (Titanic, Pour que tu m’aimes encore, S’il suffisait d’aimer, The power of love, All by myself, I’m alive…).

With this show she performs from private events to galas and casinos, between France and Morocco.

Through her participation to Dechavanne’s french TV-show “Qui sera le meilleur sosie 2012″ (TF1) and to the International Lookalike Festival in Valras-Plage, she was able to meet other professional impersonators and join them on tours around France.